Influence of Interval Period on Root Resorption Due To Orthodontic Force

Experiments were performed in 20 7-week-old male Wistar rats. This study was approved by the Animal Experiment Committee of Tokyo Dental College (approval number: 242801). Animals had free access to powdered chow (Oriental Yeast Co., Ltd., Tokyo, Japan) and tap water throughout the duration of the experiment.

Orthodontic devices were placed after rats were anesthetized with an intraperitoneal injection of pentobarbital sodium at a dose of 64.8 g/ kg body weight (Kyoritsu Seiyaku Co., Ltd, Tokyo, Japan). The experimental device used was a 0.08 × 0.30-inch closed coil spring (3M Unitek, Oklahoma, USA). Ligature wires were attached to both ends of the spring, and the spring was ligated to the maxillary first molars. A dental turbine hand piece was used to excavate a trench around the entire circumference of the maxillary incisors, following which the ligature wires attached to the spring were ligated to the incisors (Figure 1). Light-cured resin (GC Co. Ltd., Tokyo, Japan) was used every 7 days to prevent detachment of the device from the incisors [7]. 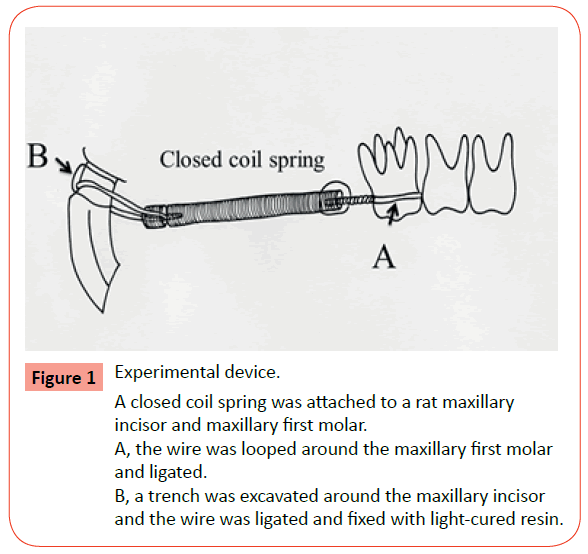 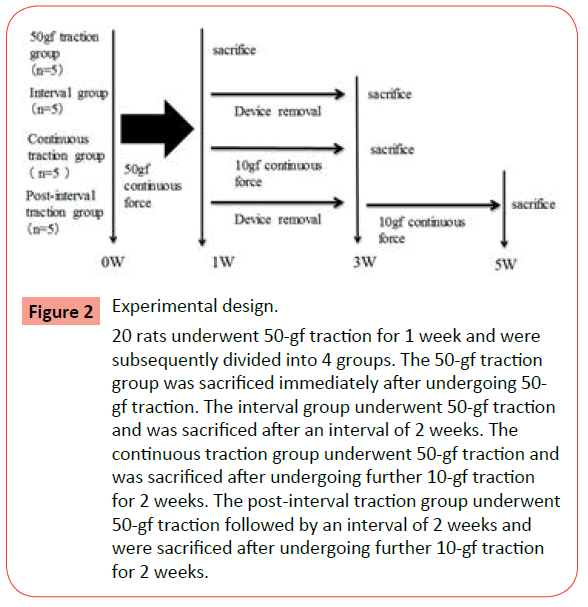 Rats were sacrificed after anesthesia with diethyl ether (Shouwakagaku, Tokyo, Japan), and the maxillary first molars were harvested en bloc along with the surrounding tissue. Harvested specimens were immersed in 10% formalin for 1 day. Soft tissues other than the periodontal ligament (PDL) were removed, following which the PDL was removed after treating with 10% sodium hypochlorite for 20 minutes. The distolingual root was severed and used as the experimental specimen.

Measurements were performed using a 3D laser measuring microscope (Olympus, Tokyo, Japan), and profiles of the pressure sides of the distolingual roots of the maxillary first molar were generated. Color imaging was used to identify the root resorption craters; the differences in crater shape were assessed visually and the root resorption craters were delineated (Figure 3A). Contour images were used to confirm the constituted resorption craters. In addition, roughness curves were observed at the red line portion in the contour image (Figure 3B), and resorption craters were identified using the points of inflection of the roughness curves (Figure 3C). The following measurements were performed on the pressure side of the root surface.

The percentage of the tooth root surface area occupied by root resorption craters (RRA %) was calculated using the following equation:

In the present study no significant differences in RRA or RRV were observed between the 50-gf traction and interval groups. Repair of root resorption craters is reportedly time-dependent [12]. The amount of repair cementum increases over the first 4 weeks, finally reaching a stable phase [20]. Gonzales et al. [9] reported that repair becomes more active after 4 weeks, with 67% of repair achieved after 16 weeks. Therefore, this study suggests that repair of root resorption tends to occur in 2 weeks, but a longer period is necessary to make a significant difference.

Our results verified using 3D laser measuring microscopy demonstrated that when root resorption occurs, traction should be temporarily interrupted and resumed after an interval period.

The authors declare that no competing interests exist.